How To Dehydrate Tomatoes with a Food Dehydrator

Do you also buy costly dried tomatoes from the market most of the times? Have you ever tried to dry tomatoes in a food dehydrator?

The dried tomatoes are an easy way to enjoy the flavor of the tomatoes for all the year around. It not only enhances the flavor of the dishes, but you can also add them to soups, sauces, and salads during any season. Drying the tomatoes in the food dehydrator is quite easy, and moreover, it does not need much time like the sun drying method. You can save your lots of tomatoes from the garden for the next use after drying them in the dehydrator.

Some of you might not know how to dehydrate tomatoes with a food dehydrator. But now there is no need to worry at all! In the below article, we are going to tell you about the best and easy way to dehydrate tomatoes in a food dehydrator. Moreover, we will also share some useful info about the dried tomatoes that will enhance your knowledge about this nutritious and healthy food.

Below are the essential things needed for drying tomatoes in a food dehydrator:

Method of dehydrating tomatoes in a food dehydrator

The below is the step by step instructions for dehydrating tomatoes in a food dehydrator:

Step 1: Preparing the tomatoes for blanching

The tomatoes you want to dry need to be a wash, skinned, dried, cut, cored and seeded. You have to wash the tomatoes under the tap of running water and with the help of the clean paper towels, pat it dry. If needed, remove the peel of the tomatoes. Now, for the blanching process, keep the tomatoes in the boiling water for around 25 seconds to 30 seconds and then immerse it in the ice water. It will be easy for you to take off the tomatoes skin with your fingers easily.

On the other hand, it is optional to do the seeding of the tomatoes. You can take out the seeds with the help of the spoon without removing the pulp. Clean the additional juice with the paper towel if needed.

Step 5: Place the tomatoes in the food dehydrator

Now, place the pieces of the tomatoes on the trays of the food dehydrator. You should arrange them in such a way on the dehydrator trays that their cut side is in an upward direction. They should be placed ½ inches far from each other without touching. If the tomatoes touch each other, then, it will make them dry out unevenly.

Step 6: Seasoning of the tomatoes

Now, it’s time to do the seasoning of the tomatoes. You can sprinkle some salt on them as per your taste. Moreover, you can use a moderate sprinkling of garlic powder, ground black pepper, or onion powder, or an herb mixture prepared from chopped herbs such as parsley, oregano, and thyme. You can use the fresh and dried herbs both.

Step 7: Turn ON the dehydrator machine

You need to dehydrate the tomatoes in a food dehydrator by putting the racks inside the machine. The total time required for drying the tomatoes will be 8 hours to 12 hours. They will turn shriveled, smaller and leathery without any tackiness. There should be space of 1 to 2 inches between the racks so that the air can flow adequately on all trays.

Keep on checking the drying status of the tomatoes after every hour. If you find that certain tomatoes are getting dried more quickly than the other tomatoes then, do the tray rotation. Furthermore, you should remove such tomatoes for avoiding the problem of burnt or scorched.

Step 8: Storage of the dried tomatoes

As soon as the tomatoes get dried completely, take out them from the dehydrator machine and cool them thoroughly at the room temperature. After cooling down, store them in vacuum sealed bags or jars, and place them in a dark and cold place till the time you want to use them again. Generally, the dried tomatoes store in an airtight container has a shelf life of 6 months to 9 months.

What are the Best Tomatoes for Drying in the food dehydrator?

The dry fleshed paste tomatoes can be dehydrated dried out more quickly than the juicy tomatoes. But you have to dice them before drying in the machine.

On the other hand, we will not recommend you to use the beefsteak tomatoes as it comprises of a large amount of gel around its seeds. While picking the tomatoes for the drying in the food dehydrator, try to select those tomatoes which are meaty, possess a similar size, and are firm.

What is the process of rehydrating the Tomatoes?

The process of rehydrating the tomatoes is very easy. You can rehydrate the dried tomatoes by spilling the boiling water on them and let them immerse in it for around 15 minutes period.

However, if after the process of rehydrating your tomatoes is still hard then, you can use the chicken or vegetable broth. You have to pour the water and the broth in equal quantities on the tomatoes and keep them in the microwave for around 2 minutes. Now, your tomatoes are ready for re-use again, and you may also store them in the fridge for approximately two weeks.

Advantages of the dried tomatoes

The below are few benefits of the dried tomatoes:

So, here we come at the end of our article “how to dehydrate tomatoes with a food dehydrator”!

You can enjoy the dried tomatoes on salad, rice, casseroles, omelets or pasta; chop it with the olives and cheese on chicken or fish or use as a topping on crostini or pizza. It is quite easy to dehydrate the tomatoes when they are available in surplus amount with you as you can relish its flavor for several months uninterruptedly.

Using the food dehydrator for drying the tomatoes is simple and faster than any other method. Place the sliced tomatoes inside and leave the rest on the machine. But don’t forget to keep an eye on the entire drying process as too much crispiness can make the tomatoes darken.

After rehydrating, you can use them as the puree for making different kinds of sauces as well for the off-seasons of the tomatoes. But the dried variety of the tomatoes is also quite delectable to eat.

We hope that you have enjoyed reading the information in the above article. Do you have any other recipe or way of making dried tomatoes in the food dehydrator? If yes then, please share it with us as your advice and experiences help us in making our article more informative and helpful to the other readers of our site.

What next topic you want us to cover on our website? Let us know your thoughts soon!

Love Food Dehydrating? then Join Us

Get updated with Food dehydrating tips, guide, reviews, and more.

How To Dry Plums in a Dehydrator

How to Keep the Flies off the Dehydrators

How To Dry Basil in a Dehydrator

How To Make Chicken Jerky in Dehydrator

How Long Do Dehydrated Apples Last

Hi there, I’m Linda, chief editor at Dehydrator Blog. We believe in Health is wealth. After struggling to buy healthy organic food for my family, I decided that’s not the right way to do. Still today many of them not aware of food dehydrators and uses of dehydrated food. That’s why my team and I want to solve this problem. That’s how Dehydrator Blog was born.. Our mission is simple. Trying to spread awareness of dehydrator to all. Join our hands if you believe in our mission. 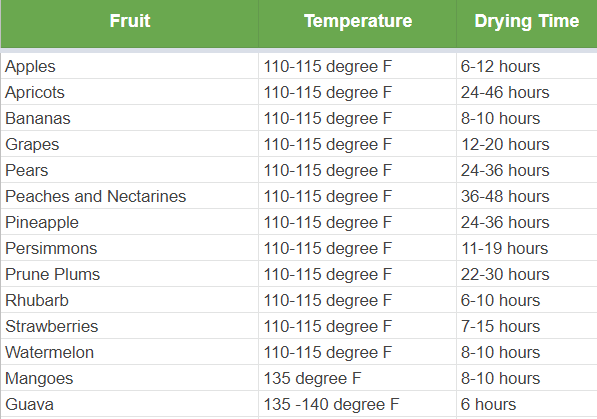 Get this Free Dehydrating Temperature and Timer Chart to dehydrate your food. This chart includes all types of Fruits, Veg, Herbs, Jerky, and more.

Yes, I Want this Free Chart

Where Should I Send Your Free Chart?